The Gesualdo Six is an award-winning British vocal ensemble comprising some of the UK’s finest consort singers, directed by Owain Park. Praised for their imaginative programming and impeccable blend, the ensemble formed in 2014 for a performance of Gesualdo’s Tenebrae Responsories in Cambridge and has gone on to perform at numerous major festivals across the UK, Europe, North America and Australia. Notable highlights include a concert as part of the distinguished Deutschlandradio Debut Series, debut at Wigmore Hall in 2021, and collaborations with the Brodsky Quartet, London Mozart Players, Luxmuralis, William Barton and Matilda Lloyd. 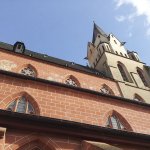